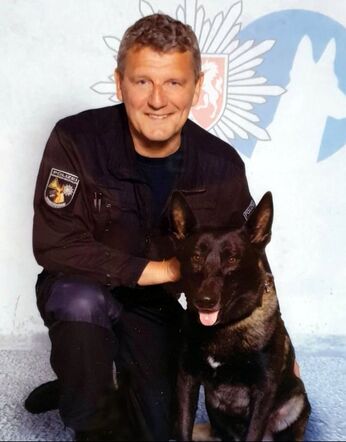 Swen is a man with bite whose heart belongs to dogs.  Swen was first introduced to handling and training dogs in his teens and spent every minute he could on the dog training ground.  He soon began to turn his passion into a profession from an early age and has since worked as a police dog handler and trainer for 28 years. More recently, Swen started to share his expertise further afield to help train antipoaching units in Kenya and the Democratic Republic of Congo. Now he is joining People for Nature & Peace to help maintain and build our wildlife protection sniffer dog unit in India.
"I became specialized in detecting explosives in 2002 but also worked in other roles until 2008, including "man trailing". This gave me the opportunity to train and lead three dogs operationally in action. Besides training police dogs, I have worked with a male Belgian Malinois police dog called Santos for several years. Santos and I are partners against crime. We live and work together as a team and have a strong mutual bond of trust and understanding.

My expertise in people tracking led to the opportunity to set up the antipoaching unit Congo Hounds in the Virunga National Park in the Democratic Republic of Congo to protect mountain gorillas.  ​It's an honour for me to train wildlife protection canine units around the world, and I am happy and excited to support People for Nature & Peace as its K9 technical advisor. Maybe it will help to make the world a little better and safe for animals.